Betty met and married the “love of her life”, race car driver Johnny Rutherford, and later served as Vice President, Johnny Rutherford, Inc. As a national Camp Fire leader, she served on Camp Fire USA’s national board of trustees from 1999-2004 and she chaired Children First: Camp Fire’s Campaign for the 21st Century.

Betty’s Camp Fire leadership began in Ft. Worth, Texas. She served as Chair of Camp Fire First Texas’ fundraiser/gala “An Artist’s Christmas”; vice president and president, of the council’s board of directors; and trustee for the council’s Endowment. It is not surprising that the council honored Betty with Camp Fire’s highest award for council volunteer leadership—The Gulick Award. 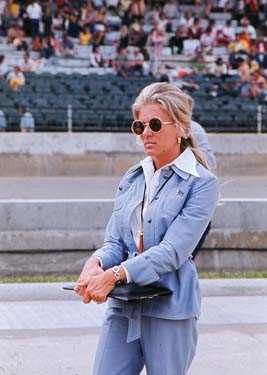 As a national Camp Fire leader, she served on Camp Fire USA’s national board of trustees from 1999-2004 and she chaired Children First: Camp Fire’s Campaign for the 21st Century.

Her community leadership was equally impressive and reflected her dedication to the community. She was a board member for the Fort Worth Performing Arts – Bass Hall & Childrens’ Education Committee; Founder and President, Championship Auto Racing Auxiliary; board member, Fort Worth Country Day School; Texas Society to Prevent Blindness; director, Capital National Bank; president, La Maison Club; past president of Jewel Charity; past president, Speedway Children’s Charities – Texas Chapter; Tarrant County Auxiliary of Edna Gladney Center; Women’s Club of Fort Worth; Fort Worth Museum of Science and History; Fort Worth Zoo Association; and a board member for the First Grandmothers’ Club of Texas.

Betty was the mother of two, John and Angela, and grandmother to seven boys.

Camp Fire joins her family, friends and the Ft. Worth community in a celebration of her life and all that she achieved at work, at home, and in the community.