You have to center joy: Understanding thriving with Dr. Kia Darling-Hammond 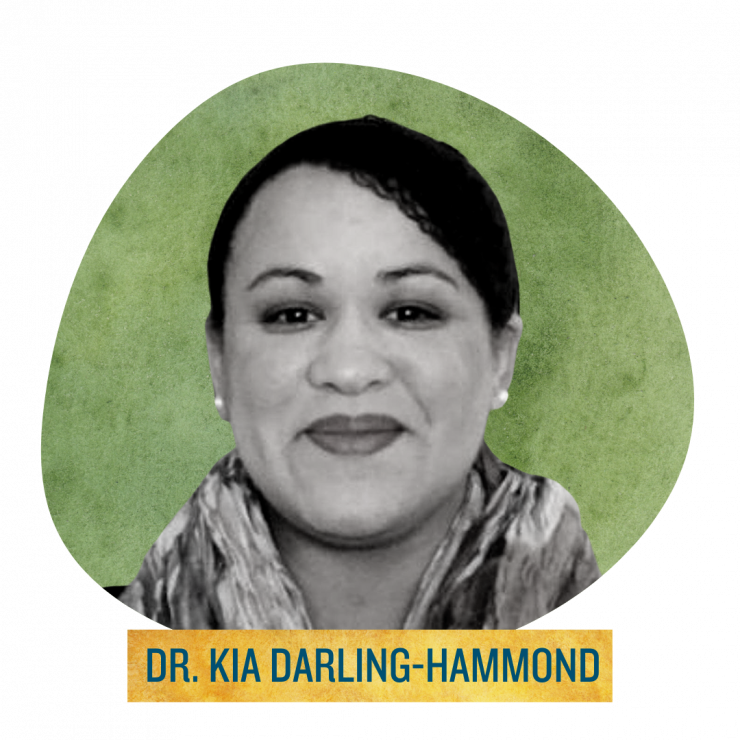 We’ve been very lucky to partner with Dr. Kia Darling-Hammond, a leader in thriving research, as we re-envisioned Camp Fire’s definition of thriving. Dr. Darling-Hammond puts “overlooked and underserved” young people at the center of her work, an approach that both fits our values and helps us move further toward our goal of being a truly equitable organization. Her thriving framework is built on youth voice and includes elements (like pleasure) that are often overlooked or even left out of definitions of thriving. She’s a huge inspiration to us, so we wanted to spend some more time asking how she helps both individuals and organizations widen their understanding of thriving.

Camp Fire: How did your interest in thriving begin?

When I became a school teacher (then an administrator), I realized that a lot of us were “doing everything right.” Students were showing up, they were making an effort, they were working hard. Some of them were exceptionally successful at school, but they were struggling to feel whole. This was also true of adults around them.

The system of schooling got in the way of wholeness in a host of ways. People couldn’t be authentic, everything that they did was controlled, there was no real bodily autonomy. Certain students were policed more than others, punished more than others. I had a wake up call about the limitations of systems and institutions for creating the conditions for thriving.

I also had a personal epiphany: There I was, in my 30s. I felt terrible. I was not happy. I had done all these things “right.” And I didn’t know how to live or build a vibrant, authentic life.

Many of my students were unapologetic about who they were. Even within the constraints of the school, where certain students (Black, Latiné, disabled, LGBTQ+/SGL) were targeted and disproportionately punished, they still had a resistant attitude of “Hey, take me or leave me.” Not only did that help me look at myself more clearly, it also helped me evaluate what we were there (as educators) to do. What the purpose of education was.

Being a school administrator almost killed me. There was no way to thrive under those conditions. So I took a break to breathe and think about what I wanted to do with my vital energy in the service of the young people I care about. That’s when I started studying flourishing and trauma and healing-centered engagement and all of those things very explicitly.

And then I came back to a bunch of the young people who had been influential in my life, and I said, “Hey, will you talk to me about what you think [thriving] is supposed to be?” “Who else should I talk to about this?”

Out of that I ended up engaging with a cadre of Black queer, trans, nonbinary, and same gender loving young adults and youth who offered a beautiful treatment of thriving, and that evolved into this framework.

Camp Fire: So your thriving framework started with the kids in your life telling you what they needed and what they wanted?

Dr. Kia: Yes. And very specifically, the young people who were overlooked and who felt like everywhere they turned something was trying to make them impossible or small.

Camp Fire: How did that change your understanding of thriving? Were there things that came out of those conversations with young people that were different than what you were learning in grad school?

Dr. Kia: First of all, very little research was treating flourishing or thriving through the lens of being multiply (pronounced mul*ti*plee) marginalized. What little there was had a tendency to stop at resilience. So we’re bouncing back, we’re surviving, we’re coping, but we’re not designing for the world we actually want to see, or even demanding it, right?

These young people were imagining beyond. They were dreaming.

And so one of the really important pieces of thriving in my framework is having the expansiveness and spaciousness to dream.

And while that’s not in the psychology literature — the dreaming, the abundance — it is in the Black fugitivity discourse, it is in the liberation literature. The invitation of the work that I was doing was to marry these different conceptions of wholeness, abundance and freedom. I needed to bring the liberation conversation into the psychology: What happens when self determination isn’t just individual, but political? When it’s not just individual, but collective? (Note: there is exciting new research on critical positive youth development and the power of collective activism for healing and thriving.)

These young people also had a treatment of pleasure that was important, because their engagement with pleasure was very ratchet, right? It was loud, it was unapologetic, it was irreverent. It was not “respectable.” And that was such an important freedom practice that they were bringing into this conversation about thriving. Also, because their pleasure was queer, trans and nonbinary pleasure, same gender loving pleasure, they were refusing stigma, they were refusing shame. So even though [pleasure] is in some of the literature, the way they were doing it as a prerequisite for thriving was an important contribution.

And then, of course, relief is a big part of any discourse on flourishing. But what does relief mean when you’re Black and queer and young? The ways that we imagine freedom when we center these identities, especially these identities in tandem, grows and evolves.

In addition to racism, anti-Blackness, and cis-hetero-patriarchy, youth age-ism is at play: Adultism is invisible to a lot of us, especially those of us who are designing frameworks, writing the literature, making these decisions and designing the programs. So centering [relief] from oppression was a big contribution and something that they [said] was essential.

They also talked about the importance of affinity — of being legible to the people around them and not having to explain themselves. It’s not that you can’t be in positive relationship with people who are different from you. But there has to be a place where you get to just be. They really honed in on, “I just need to have a place where I can be whole, simply be, just exist.”

Camp Fire: I don’t think I’ve seen pleasure listed on any developmental framework before. When an organization uses a framework that includes pleasure, how does that change how it interacts?

Dr. Kia: Well, I don’t know that having it listed makes a difference by itself. I think this has to do with beliefs and practices, right? You have to center joy. You have to ask yourself: “Is this joyful? Does this create the conditions for joy? How might this get in the way of joy? And are the people who I’ve designed this for in agreement with me that this is joyful?”

The truth is, a lot of what we do to serve young people constrains them, as well. A lot of what we design that’s supposed to be about safety becomes about compliance and control. So people who have designed inside of the confines of the way we normally do youth stuff, start to grapple with these questions:

“How do we do freedom and structure?

How do we do joy and safety?”

One of the things that I notice is that the adults have to do the work of unlearning scarcity: “Wait a minute, I can thrive? This could be fun? What would make this fun for me?”

The adults have to change their framework for what it means to do youth development. So that kind of stuff comes up. In my experience, when I do this work with adults, it gets them really excited and invigorated. And then they run into these questions about how do I make freedom considering the confines of the world I live in?

Camp Fire: What gets people past those roadblocks?

Dr. Kia: One thing that’s really important is helping people tap into their inner child. We do a lot of work around imagining your moments of wholeness. Imagine things that make you just giddy. Be at play. Go into that space and then imagine what’s possible. I think taking a reform approach is immediately self-limiting. A dreaming approach is expansive. You have to give people permission to dream. Give yourself permission to assume that anything is possible.

And remember that we have come as far as we have (socially, politically) because people have been imaginative, right? There’s been struggle, certainly, there’s been organizing and fighting and all of that, but all of the revolution we’ve seen has started with an idea, a dream. And so we know it’s possible. Possibility models are powerful.

And you have to have time to keep imagining, which means you have to make demands and refusals. You get to refuse scarcity. You get to refuse the things that make you feel impossible or small. You get to refuse things that put you in danger. I’m not saying there aren’t consequences, but one of the most powerful things for people to recognize is that there’s always a choice. That’s really important, especially for those of us whose communities experience genocide or enslavement, because those are conditions under which people have to really face the question of “What can I live with?” “What will I refuse?” The stakes are immediate and sky high. And then there’s the demand: You’re entitled to thrive. You deserve to thrive. I’m entitled to eat mangoes (my favorite fruit) and lounge on the beach and tell stories and make music with kids and weave the things that I need. How do I create the conditions that make that real for me and others?

Camp Fire: What kinds of refusals and demands have you seen people and organizations you work with make?

Dr. Kia: A lot of people have quit jobs! Many have quit relationships. They recognize that their trajectory is not what they want and choose to shift direction. One young person decided to compete in the Gay Games, which also meant publicly, and very visibly, disclosing their sexual orientation. I’ve definitely seen people reframe their policies. In one case, [an organization said] “If we know that young Black and brown people have the most sporadic, least consistent, least well-subsidized access to mental health services, what policy will we enact to mitigate that access issue? Oh, we’re not going to charge or we’ll have a sliding scale. We’ll look for grants and gifts that subsidize the cost of service.” That kind of thing.

Camp Fire: When other organizations have looked at what thriving really means, how has it changed them?

Dr. Kia: Camp Fire is different, because thriving is already the core. But in most of the organizations I work with, nobody’s really thought about thriving. They’ve thought about surviving, success, coping, or resilience, but not thriving. So when you invite people to really think about the conditions that make thriving possible, they often talk about feeling energized, surprised, and relieved. Yeah. There’s something very hopeful about somebody saying, “Oh, yeah, totally, thriving is there for you. It’s possible, You deserve it.”

These efforts do run into structural challenges, and not everybody is ready to face those things. Scarcity culture is real. Urgency culture is real. So then the invitation is to figure out what you can do in the moment that’s manageable.

Learning how to hold boundaries is big work for a lot of us, right? Helping people to identify their needs and desires, come up with the language to talk about them, and feel comfortable championing their holistic wellbeing is a big part of the work.

People are very grateful for the support to do that. They become creative about making space and time for it.