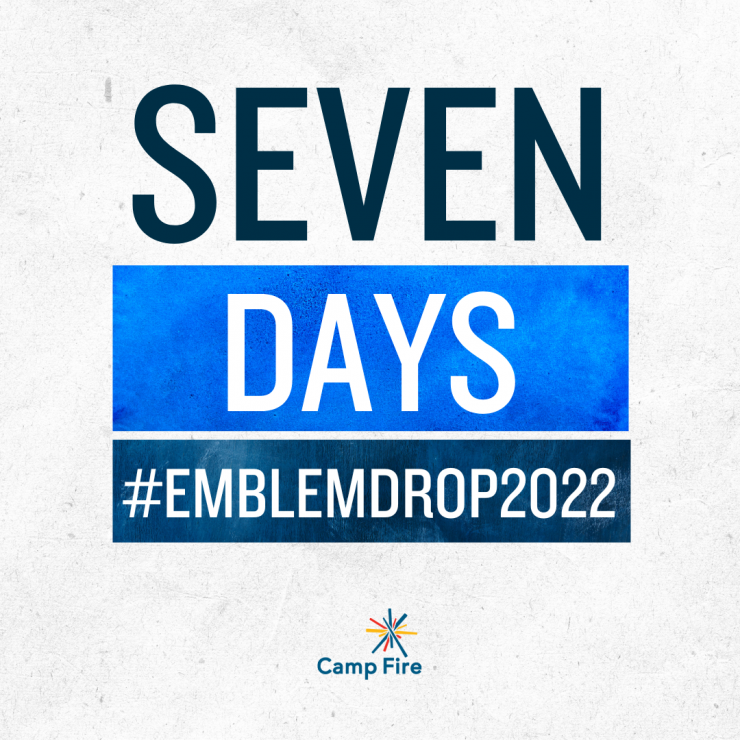 Count ’em: There are seven days left until we reveal Camp Fire’s first full emblem redesign in 100 years. Emblems have been an important part of Camp Fire’s history; they are a tangible, displayable record of how Camp Fire members have grown, learned, achieved and contributed to their communities. But our members, leaders and clubs recognized that this tradition needed revisions to reflect where Camp Fire is today, not just where it’s been.

How did we arrive at 125 new emblem designs and a few crucial updates to how they are earned? By following our values. Two values in particular inspired us to reimagine how to recognize and reward young people in Camp Fire:

1. WE ARE INCLUSIVE. Part of creating a safe and inclusive environment that welcomes all young people is reckoning with mistakes we’ve made openly and honestly. In 2019, Camp Fire National began work to acknowledge, address, and end our use of Native and Indigenous inspired language, symbols, and traditions. Camp Fire understands that its historic misuse and creation of items that were meant to mimic Native and Indigenous cultures, particularly through our rewards, recognitions, and ceremonies, have caused harm to Native and Indigenous communities by contributing to the homogenization, stereotyping, and erasure of these cultures. In 2020, our task force of council representatives, National Headquarters staff, content experts, members of Indigenous communities, and a Youth Advisory Cabinet member worked with Thrive Paradigm to audit instances of cultural appropriation throughout our organization. That team determined redesigning the awards and recognition emblems would be a necessary step in repairing harm. But what would that process look like? We turned to another Camp Fire value:

2. WE HONOR THE POWER OF YOUNG PEOPLE. So we asked them to lead this process. In 2021, Camp Fire National hosted a group of young people from Camp Fire councils across the nation to re-imagine our national rewards and recognition items. This initiative, called Make Your Mark, allowed young people across the country to discuss the implications of cultural appropriation and to design new emblems for youth rewards and recognition items.

“We talked through what cultural appropriation is, how to recognize it, and where else it might show up in their lives,” explained Ben Matthews, Camp Fire Diversity, Equity, and Inclusion Specialist. “We helped them understand why some of the images we were using were problematic.”

Why redesign all of the emblems if only some had culturally appropriated imagery? Because Camp Fire’s young people said so!

“Even if some of the images weren’t problematic, they weren’t really resonating with young people now,” Ben said. “One of the things we heard from young people was, ‘I earned this five years ago, but I have no idea what it is. I can’t tell what it’s supposed to represent.’ Our rewards and recognition process wasn’t working for them, anyway.”

Our designer, Khyneesha Edwards, partnered with the Make Your Mark team and our Youth Advisory Council to develop a whole new set of emblems that reflected how young people wanted to be recognized today.

“We worked with them to decide what meant the most to them,” Ben said, “and what they would be proud to earn and proud to display.”

Excited yet? We’ll be counting down to #EmblemDrop2022 on Instagram, Twitter, Facebook, LinkedIn over the next week. Join us as we anticipate and celebrate this historic update! And while you’re at it, check out the new official merch designs in our Camp Fire store.