It Matters What You Measure (Pt. 3): The Stories Behind the Stats

You know by now that December has been all about impact. We’ve talked about how we measure our progress and the data that tells us our Thrive{ology} programs are working.

Today, we want to get to the true heart of impact: the individual stories that give us the why behind all the percentages, numbers, and surveys. 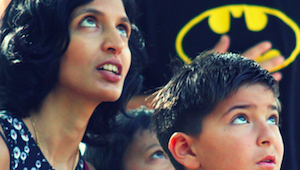 “My son had many difficulties in 3rd grade, and he was so defeated by the end of the school year. He wasn’t excited about a new camp, but quickly changed his mind after the first day. He also won a Leadership Award, and for the kid that didn’t win anything all school year, it was so very meaningful. I saw some spark come back to my son, and I am a grateful mama.” 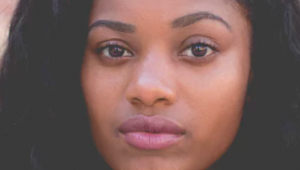 “When I first started being a part of this organization, I was a shy girl. As the years passed, I felt more comfortable with myself: using my words, being more confident and constantly talking in front of people and making a difference in society everyday formed me into the person I always wanted to be. College is a struggle, especially if you don’t feel great about yourself, and having the leadership qualities I was provided with while partaking in Teens on Fire continues to make life a whole lot easier for me.  I can’t be more thankful to be part of such an amazing organization with people who truly share the same values on making a difference in the world.” 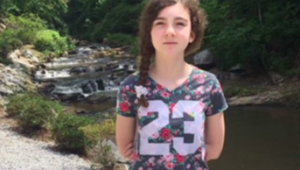 “My first year at Camp Toccoa (one of six years and counting!) was when I was seven, in the summer of 2011. I didn’t have many friends and I was extremely shy. Right from the start, Camp Toccoa has given me so much that I can’t name…I cherish every moment and feeling. Like how I can say anything to my friends without being made fun of. I cherish the feeling that the woods feel so desolate yet magical, or the innocent feeling of having a butterfly land on you. Even the feeling of laying under the stars at night while whispering secrets into someone’s ear. Camp Fire Camp Toccoa is the feeling of friendship and nature and a million things in between. But those a million things is how Camp Toccoa changed my life when I was seven years old and how it’ll change me even now. “ 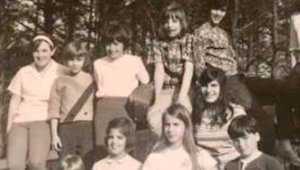 “As a child, I was often alone and so was sometimes awkward around other kids. I loved the outdoors, usually playing in the woods near my house. In elementary school, some of my friends were Brownies, so I went to a couple meetings and found them uninteresting because it seemed to me they were mostly focused on becoming good homemakers. Then a Camp Fire club formed and I found my spark! I immediately loved how everyone (us kids) were encouraged to speak up and to take active roles in the club meetings, as well as following the book to earn beads and emblems. It was through Camp Fire that I was able to expand my love of the outdoors and learn valuable survival skills. I also learned how to present my thoughts in a well organized and professional manner, and to speak before government bodies such as our local city council, the county council and even on Capitol Hill in DC. I owe much to Camp Fire for helping me become the confident, thoughtful and polished woman I am today.” 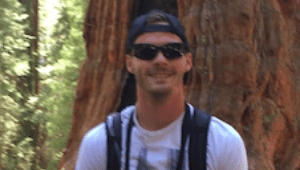 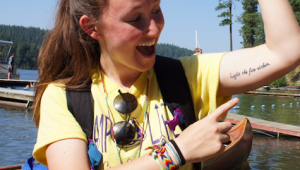 “Before I came to Camp Sweyolakan (Camp Fire Inland Northwest), I didn’t know what I wanted in life; but then I came here and saw what Camp Fire had to offer. Its inclusion statement was something I really connected with because I don’t see that a lot in many other places, and I realized that I really enjoyed working with kids. I changed my whole career path and now I’m a teacher. I am now doing something that makes me happy, which is helping youth develop into leaders. It’s something I”m really passionate about! I got a tattoo to remind me to ‘Light the fire within’ I need to find what makes me happy in life. When I pursue what I’m passionate about, I help others do the same!” 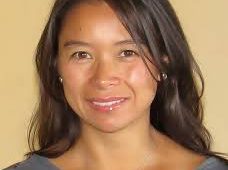 “As a young girl, I was shy; you might have called me a wallflower. Starting in first grade, I became a Camp Fire Blue Bird in Puyallup, WA, through the Camp Fire Orca council. After that, Camp Fire became huge part of my life and taught me the life skills and leadership skills that have opened up so many opportunities in my life and career. Caring adults in Camp Fire mentored me for more than a decade; they believed in me, encouraged me, and helped me blossom into a confident ‘wild flower’ and leader. I am so grateful to Camp Fire for its transformative role in my life.” 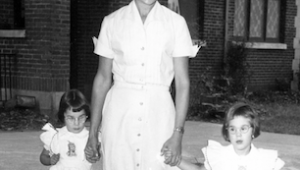 “I had four children, two sons, Bill and John, and twin daughters, Mary Lee and Jane. My daughters are blind and, from the start, I instilled in them a strength of purpose. When the twins were about eleven, the Camp Fire Girls accepted them as regular members. They joined with the understanding that they would be expected to take part in the same activities as everybody else. On overnight hikes, they would joke with their fellow campers, ‘What do you mean you’re afraid of the dark? There’s nothing to it!'”

Thanks for telling your Camp Fire stories—keep on sharing them! SEND US YOUR STORY! You remind us why we do what we do…and why it’s so important to keep it up!

Did these stories get you fired up? Create your own fundraising page to support Camp Fire’s Newman’s Own Foundation Holiday Challenge campaign on Crowdrise. This week, the five nonprofits with the most active fundraising team members will win an extra $5,000! Let’s win that cash for our incredible Camp Fire kids!